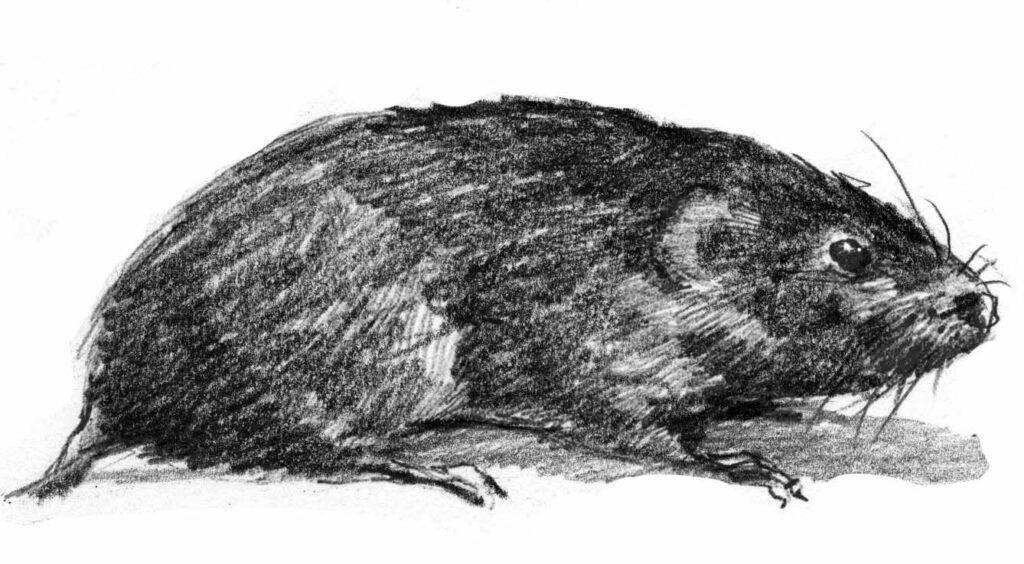 If you’ve never seen—or heard of—the southern bog lemming, you’re not alone. Although this small mammal scurries through our landscape year-round, it is elusive by nature. So elusive, in fact, that the southern bog lemming (Synaptomys cooperi) is listed as a species of greatest conservation need in both New Hampshire and Vermont, as well as in other northeastern states—mainly because scientists struggle to find and track these rodents.

Despite their name, southern bog lemmings are not purely southern, nor do they live only in bogs. They inhabit a large geographic range, from Manitoba east to the Atlantic Ocean and as far south as North Carolina. Regional populations live in different types of habitats, from prairie grasslands to areas featuring more sedges. In the Northeast, they have been documented living in tamarack black spruce forests and dwarf shrub bogs.

In some areas, southern bog lemmings create surface runways in grassy conditions. They use their sharp incisors to cut grasses, allowing adjacent stalks to fall over and form concealed corridors of safety. In northeastern forests, southern bog lemmings also utilize subterranean tunnels, as well as tunnels through sphagnum moss in boggy areas.

Within this network, southern bog lemmings construct chambers for raising young. They build nests of dry leaves and grasses and line these with soft material such as fur. Breeding can occur any time of year, although it is less common in extreme heat or very cold temperatures. Females produce two to three litters annually with an average of three young per litter. Born hairless and pink, neonates remain with their mothers for 21 days. Subsequent litters will be raised in the same nests.

The lemmings’ diet is mostly vegetarian, consisting of seeds, stems, and leaves of herbaceous plants and sedges, along with mosses, fungi, bark, or roots. Their grooved upper incisors and strong jaws allow southern bog lemmings to consume woodier tissues than other species, including voles. They cut stems to gain access to the nutritious upper parts of the plants, then discard the stems in small, neat piles.

One tell-tale sign of southern bog lemming presence is their bright green, oval droppings, which the animals deposit in clusters. In contrast, the droppings of other small mammals are generally black or brown.

I was delighted to learn about this charming little mammal, and I am keeping my eyes peeled for a rare glimpse of the southern bog lemming,

Tiffany Soukup is a writer, photographer, traveler, and park manager with Vermont State Parks. The illustration for this column is by Adelaide Murphy Tyrol. The Outside Story is assigned and edited by Northern Woodlands magazine and sponsored by the Wellborn Ecology Fund of the New Hampshire Charitable Foundation: www.nhcf.org.