Even in Winter, Area CSAs Bustle 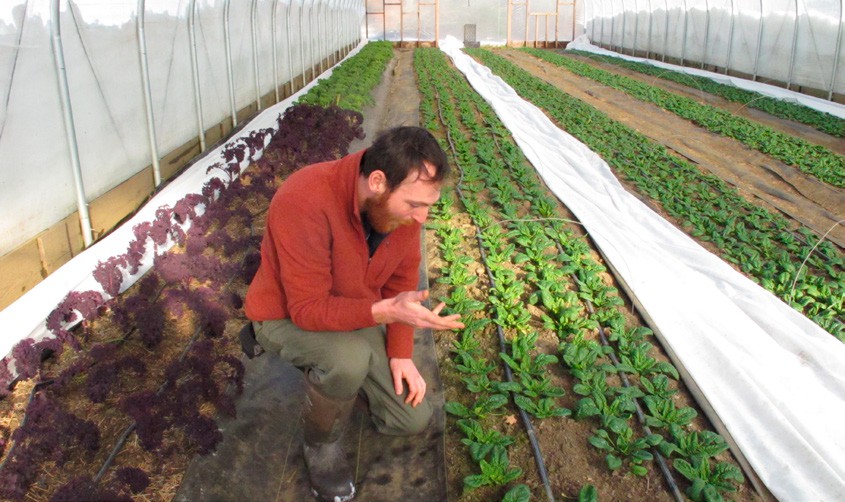 Images of fresh, local food do not pop into most people’s minds these cold, stormy days. For area farmers and community-supported agriculture (CSA) shareholders, however, local food makes it on the table—even in the depths of winter.

CSAs involves area consumers who purchase a share of a farm’s harvest. While there is some financial risk involved for the shareholders, the CSA model allows members to connect with the people growing their food. Farmers, on the other hand, benefit by securing funding for their operations before the start of the growing season.

Regularly-scheduled deliveries or pick-up times are another standard component of the CSA system, although each program is unique. Traditionally active during the summertime, many CSAs in the area have expanded to offer winter shares in order to meet consumers’ year-round nutritional needs.

In the White River Valley, CSAs make a variety of food products— ranging from eggs and dairy, to vegetables, meat, and herbs—available throughout the coldest season of the year.

Overlooking the village and the Route 110 valley, Free Verse Farm is much quieter during the long winter months. In summer, some 60 different types of herbs soak up sunlight at Misha Johnson and Taylor Katz’s Chelsea farmstead.

These plants go into the farm’s tisanes (herbal teas), culinary herbs, and medicinal products, sold at stores around the Upper Valley. The farm’s CSA, which, in this case, stands for “community-supported apothecary,” runs all four seasons.

Customers may opt for either a tea share or an apothecary share to receive or pick up in time for the two solstices and equinoxes. Each package, Katz explained, is “catered towards the upcoming season, so all the products in it are designed to keep you well, happy and thriving during that season.”

The CSA is a way for the couple to “offer very, very small batch products that we’re not offering widely.” These specialty items range from herbal bug sprays to honey to single herb tinctures, which they do not usually make available to the public, Katz said.

“It’s really fun for us, because it allows us to be whimsical and creative and put together a selection of products that is really what we’re inspired by at that moment,” she said.

“A challenge,” Katz noted, “is the price tag.” Each share includes several individual items. “You’re paying up front for a lot of things at once. … that, I think, is a barrier for some people.”

Another difficulty, Katz said, has been “educating people about what it is that we’re making. What are these remedies? What are they going to do for me?” Free Verse’s tea blends have proven a good stepping stone for introducing people to the world of herbs, added Katz, who also picks up side work as a poet for hire.

As committed as they are to providing high-quality herbal items, the farmers are also very dedicated to their art. “Every share has what we call an ‘art treasure’”—usually a small print by photographer and trained herbalist, Johnson.

Moving back east after farming and studying in California, Katz and Johnson have grown herbs in the Green Mountains for the past six years. This summer will be their fourth on their 38-acre Chelsea property.

Kyle Doda and his team are about to wrap up their fifth year of running a winter CSA out of the small Brookfield farm. The Virginia native, now in his early 30s, has been harvesting vegetables on Stone Road for the past seven years.

Doda had been interested in growing his own food and later started considering the idea of farming on a larger scale. His goal, he said, is to “[feed] people good-quality food [that is] grown in a way that isn’t abusive to the soil or nature.”

“It’s not really something that you can do so-so,” he said of the commitment involved in operating a certified organic vegetable farm. “It’s a lifestyle change.”

The 50-member winter CSA at 1000 Stone Farm has traditionally run from the end of October to the beginning of February. “You get some of the last [tastes] of summer and fall,” Doda explained.

Over the course of the late fall and early winter, shareholders collected boxes loaded with greens, root vegetables, squash, and members of the allium family.

The farm, which sells its food at the Burlington Farmers Market and to several area restaurants, has been running the CSA for 45 consecutive weeks per year. “[It] is a little overwhelming at times,” Doda said, standing next to the CSA pickup area in the barn. This year, they plan to space out their production to include week-long pauses between CSA seasons.

Unlike many area veggie operations, 1000 Stone Farm offers a year-round mushroom CSA as well. Some of this crop travels down to Boston with Farmers to You, a food share program that connects rural farmers with city slickers.

A lot of Doda’s time is spent on the road, dropping off food at points of sale and making CSA deliveries to Montpelier and Burlington. Though time-consuming to manage, the CSA helps bolster the farm’s cash flow and payroll, Doda said.

Nikolaus Horster’s Pinzgauer cattle are stocky, hearty creatures. Originating in Austria, the breed is well-suited to the long, cold winters in Vermont—and the meat is known to be tender and flavorful, Horster said.

Shire Beef, the 110-head farm Horster and his family own in Vershire, is one of the largest cattle operations in the state, Horster said.

For the Munich, Germany native, agriculture is a relatively new venture. Formerly employed in the construction industry, Horster ran what he called a “hobby farm” in Thetford before seizing the opportunity to expand.

Now in its sixth year, Shire Beef sells some its cuts as an add-on option to the vegetable CSAs offered by Root 5 Farm, Sweetland Farm, and Crossroads Farm, in Fairlee, Norwich, and Post Mills, respectively. Horster said he hopes to start a purely meat “subscription service” this year.

While Horster sells beef at retail outlets in the Upper Valley, the bulk of the farm’s products go to Worthy Group restaurants in South Royalton, Woodstock, and Waitsfield. Shire Beef and Almanack Farm, in Chelsea, are the sole providers of meat to the popular hamburger joints, he explained.

A market for high-quality beef also exists outside of Vermont, but the “cost of shipping and dry ice is prohibitive,” Horster explained. “I doubt that it’s very sustainable [either].”

The local market is more economically and environmentally viable, said Horster. His farm, he explained, is dedicated to improving the well-being of the soil and the ecosystem through holistically-planned grazing.

By carefully rotating their herd through several pastures, multiple times per season, “We are actually using our cattle to sequester carbon back into the soil,” Horster said.

Spending their lives outdoors, the Shire Beef herd are doing good by the soil and by the people who eat them.

For dairy farmers Randy and Lisa Robar of Kiss the Cow Farm in Barnard, the traditional CSA model was not for them. Instead of being tied to pre-planned deliveries of farmer selected items, the 100 members of this winter CSA submit custom orders through the farm’s website. If a customer goes on vacation one week, the credit remains in his or her account with Kiss the Cow.

“[It’s] very flexible,” he said. “I think that’s why it’s successful.” While the Robars mainly produce dairy and poultry products on their farm, they also sell a wide range of other food items from area farms. Vegetables and meat come from their neighbors at Heartwood Farm and Eastman Farm, respectively. Free Verse Farm provides culinary herbs, and Vermont Bean Crafters supply veggie burgers.

Milking their small herd of Jersey cows every day, the couple are known for their ice cream and milk, which they sell at their farm stand on Royalton Turnpike and as part of their CSA. Their chocolate ice cream is a favorite, Randy Robar said.

The couple are both former educators who, like many relative newcomers to farming, decided to start growing their own food—and then started growing it for others. Guiding and teaching visitors and volunteers, who come to Kiss the Cow through the WWOOF (World Wide Opportunities on Organic Farms) program, helps the Robars get their “educational fix.”

Soon, they hope to be able to afford to hire part-time local helpers to assist with farm chores. Randy Robar is also eager to expand the creamery and the farm’s ice cream output. “It’s good stuff!” Whitcomb on both charges together might unduly prejudice the jury against him.

Stetler did not respond to a request for comments for this article.

In addition to his federal court case, Whitcomb also faces a pending charge in state court for home improvement fraud.

The investigation into Colson’s death is ongoing, and anyone with information regarding the death of Colson can contact Vermont State Police at 802-234-9933.

. Find a directory of White River Valley CSAs in the guide to the Vermont Farm Show, included in this week’s paper.