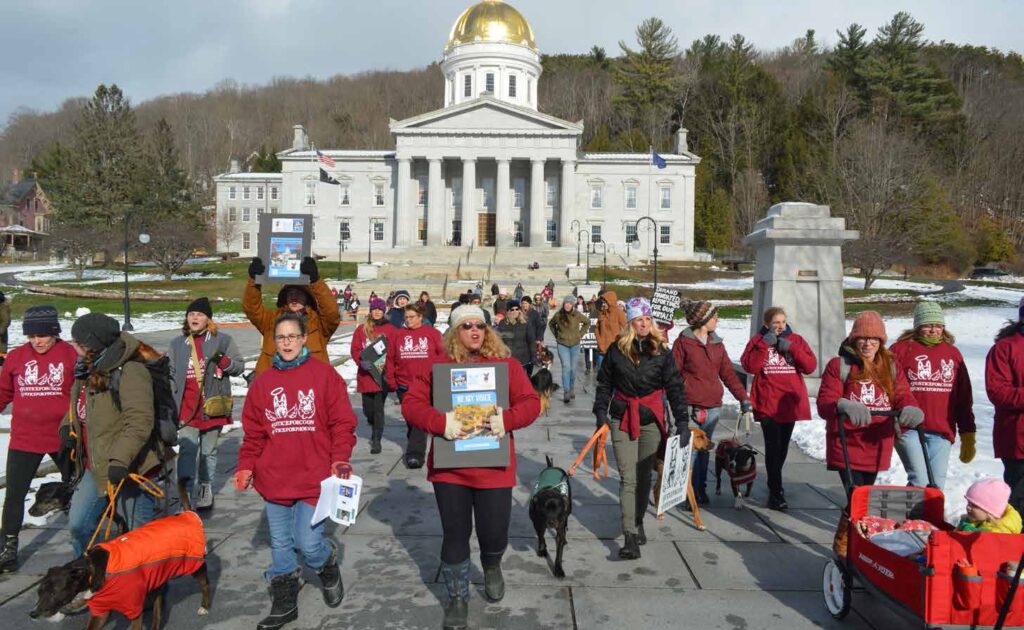 About 65 people and dozens of dogs turned out for a “pack walk” in Montpelier on Sunday to rally attention to the need for better animal cruelty and neglect laws after the death of one dog, and near death of another in Randolph. (Herald / Darren Marcy)

Two neglected German shepherds from Randolph have become the poster dogs behind an effort to reform animal cruelty laws in Vermont.

The death of Coon and the near death of Ace, now known as Phoenix, from starvation came at the hands of a Randolph man, according to authorities. Those cases have prompted an effort to introduce stricter laws around animal cruelty in the upcoming legislative session.

The case against Justin Macaskill, 26, was investigated by Vermont Game Warden Chad Barrett, who submitted that information to Orange County State’s Attorney Dickson Corbett for the potential filing of charges. Heather Bent, the executive director of Potter’s Angels Rescue, which was started in Randolph, said it was the worst case of cruelty she’s ever experienced.

Bent was part of the effort to save Phoenix, a 6-year-old German shepherd that weighed just 37 pounds when he was rescued.

Another German shepherd, Coon, died before officials moved in. Bent said Macaskill carried Coon’s carcass, which Phoenix had fed on, a mile into the woods to dispose of it. 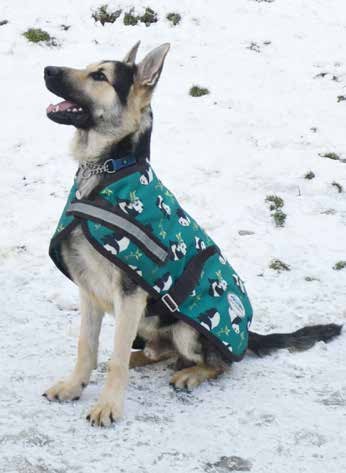 Efforts to reach Macaskill and his current girlfriend, Gianna Charland, for comment were unsuccessful. After sending a Facebook message to Charland, a person named Jessica Tibbetts who identified herself as Charland’s mother replied that neither would comment.

“You’re blocked on both accounts. So do yourself a favor and stop trying,” Tibbetts wrote on Messenger. “Furthermore, Gianna has nothing to do with what’s going on so if her name ends up in your stupid article, I will unleash on you.”

Charland has not been charged and the couple reportedly got together shortly before the dogs were discovered in September, according to several people who know the pair.

The two dogs had been starved for months in a garage, Bent said, before they were discovered.

Coon, was already dead and disposed of. Phoenix weighed 37 pounds and couldn’t support his own weight when he was rescued from the home and taken to the vet.

When first found, he was believed to be dead. He was on the concrete floor of the garage, his eyes sealed shut, “caked in his own filth,” Bent wrote in a piece she titled “Phoenix’s Story.”

Bent said there was a bag of dog food at the top of the stairs leading to the garage.

At the vet’s office, Phoenix’s blood pressure was so low it wouldn’t register, Bent said.

Still, his spirit was alive inside his failing body. When his rescuer gave him a gentle pat on the head, Phoenix gave her a weak kiss.

Against all odds, vets have said, Phoenix has made what appears to be complete recovery. At last check, he weighed 80 pounds and plays like a puppy with other dogs and people. Tests show no organ damage and he is just as friendly and playful as a puppy.

“It’s a pretty miraculous recovery,” Bent said. “All of the vets involved are shocked he has excelled and done so well.”

Macaskill was arraigned on two misdemeanor counts of cruelty to animals at a hearing Wednesday, Nov. 23, in Orange County Superior Court, Criminal Division.

Judge Elizabeth Mann released Macaskill on several conditions including that he not “have, buy, or care for any domestic animals.”

Mann did allow a defense motion to allow Macaskill to keep three large tanks of exotic fish because of the size of the tanks and the specialty care the fish require would make it hard for him to get rid of them.

“They do need to be properly cared for,” Mann said.

Bent said the problem with animal cruelty cases is they’re very hard to investigate and prove in court.

“We’ve got fairly decent laws in Vermont,” Bent said. “But animal-abuse cases are difficult to investigate and to provide enough information so that the state’s attorney can charge. There are so many nuances in the judicial system.”

Bent said that there are times when a law enforcement officer or prosecutor doesn’t think an animal case is worth spending time on, but most of the time in Vermont, they give their best effort.

“Some cases are getting thrown out,” Bent said. “Then there are judges who aren’t handing down adequate punishments for the crimes. Some people are getting a slap on the wrist.”

But Bent said it’s important. There are proven links between people who abuse animals and violent crime.

The FBI Law Enforcement Bulletin, in an article titled, “The Link Between Animal Cruelty and Human Violence,” by Charlie Robinson and Victoria Clausen, shows the connection between violence against animals and humans.

“Recent research shows a well-documented link that it is a predictive or co-occurring crime with violence against humans and is associated with other types of violent offenses,” the article said.

And animals are particularly at risk in domestic violence situations.

The article said research shows the abuser will often use threats or actual violence against the animal to create fear or control over a victim, to punish a victim, or to convince them to return to an abusive relationship.

The article said, 75% of abused women who have companion animals report a history of their companion animal being threatened or intentionally harmed by their intimate partner, with children being present and witnessing the violence over 90% of the time.

“People who think it’s not that important, it all ties together,” Bent said. “I’m tired of watching it happen. Then the people who do it, get away with it.”

The situation was discovered with a tip to the Randolph animal control officer, who learned about the alleged abuse. When the officer went to check on the situation, the garage had apparently been cleaned and there was no sign of any dogs at the residence.

Without evidence, nothing could be done.

But the animal control officer approached Macaskill’s landlord, who instructed the property manager to watch for the return of the animals.

But that never happened and two months passed before Phoenix, then Ace, was discovered and Coon had died.

There were also two cats in the residence. Both were malnourished. One had suffered a severe head injury and the other was blind. The cat with the head injury was euthanized. The other cat regained its sight as it gained weight.

Phoenix spent five days in the vet’s care before Bent took him home to be rehabilitated.

He had to be fed on a strict schedule to adjust his body to receiving food again.

“The first thing I noticed about Phoenix was how large his paws were compared to his frail little body,” Bent said. “He didn’t look like a real dog. He resembled a caricature with his oversized head and paws.”

When Bent took him to a vet after a week for a checkup and to adjust the feeding schedule, the vet took one look at Phoenix being carried in and burst into tears. After two weeks of care, she still didn’t think Phoenix would survive.

Also, after just one week with Bent, some of his personality started to come out. Bent discovered that he likes to sing along with people and would weakly howl along as she sang.

He also started to show off some of his goofiness.

“He is one of those rare gems that will keep you laughing and smiling throughout the day with his goofy antics,” Bent said. “If I only had one word to describe him it would be goofy. He carries such happiness and joy in everything he does.”

He also showed a gentleness to other canines in the home, playing with Bent’s blind dog that is a quarter of his full size, and eating alongside the other dogs without any food aggression despite being starved nearly to death.

After four weeks with Bent, she was able to take his harness off of him.

He was just over 60 pounds.

“He was finally able to get around on his own and no longer relied on my assistance,” Bent said. “It was an emotional moment.”

While most of the story focuses on Phoenix’s miraculous recovery, many don’t want people to forget Coon, the dog that didn’t make it.

Amanda Ukasick of Randolph remembers Coon all too well.

Ukasick said she and Macaskill were in a relationship from 2014 to 2019, beginning in high school.

Together, they moved to the Pacific Northwest and took in Coon from a farm where they were working after the dog had bonded with them. They returned to Vermont in 2017 with Coon.

“She was so curious about everything,” Ukasick said. “She was so smart and so goofy. She was awesome.”

Ukasick said she was really sad to see what happened to Coon.

She and Macaskill broke up in 2019, a couple of years after they got Coon, but she said Coon was Macaskill’s dog and she stayed with him, but she didn’t always like the way Macaskill treated the dog.

She said she remembers he would kick at Coon when she would get in his way, and other things that she now wishes she had reported.

“I could have been one of the people who could have spoken up sooner,” Ukasick said. “But I was afraid for my own safety. I’m sad.”

Ukasick said Coon was such a good dog, wasn’t aggressive and just a tad timid.

“She was just so incredibly lovable,” Ukasick said. “She was a good dog. She was so good.”

Ukasick said Macaskill got Ace (Phoenix) after they separated.

Bent and others are fighting to change the laws.

They want mandatory reporting for people in positions of authority to report animal neglect and abuse.

“The saddest part about this case is all of the people who knew about it and did not cooperate with the proper authorities,” Bent wrote in “Phoenix’s Story.”

A petition now circulating is asking people to reach out to their representatives in Montpelier to support the bill when it is introduced.

“When they hear all the people in their area who care about this cause and they’re being held accountable, they’ll be in support,” Bent said.

To further create interest in the legislation, a “Pack Walk,” was held Sunday in Montpelier.

More than 65 people and dozens of dogs turned out in frigid, windy weather and marched around the capital city carrying signs and chanting, “Justice for Phoenix, justice for Coon, just say no to animal abuse.”

Whatever comes of the court case or proposed changes to the laws, Phoenix appears to have a bright future ahead of him.

Sunday, he was strong and energetic, running around the yard and bringing his toys to be thrown or playing an aggressive game of tug-of-war with anybody who would challenge his strength.

One person wouldn’t react to his offer to play quickly enough and he would move on to the next, eager to find someone to match his energy.

“Phoenix is a survivor and his body fought hard to be here,” Bent said.

Later that same day, Phoenix was going to his new home with his new adoptive family.

His new home has a German shepherd playmate waiting for him. They’ve become friends and romp in a way only two big dogs can.

“I am so thankful to have this home lined up for him. He’s finishing up his time with me,” Bent said. “I’m really happy for him.”