Its Cultural and Economic Effects 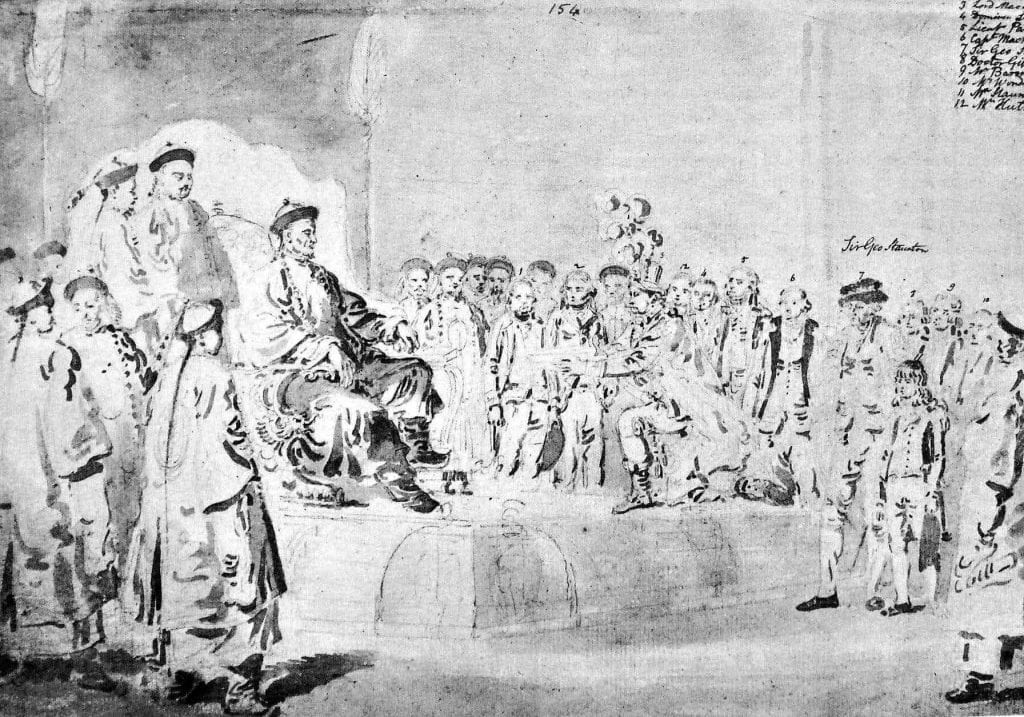 This illustration from the British Library’s collection of Western Drawings shows Lord Macartney’s first meeting with the Qianlong Emperor in 1793. (Wikimedia Commons)

Probably the worst decision in human history was that of the Chinese Emperor Xuando (also known as Zhu Zhanji) in 1434. In that year he issued the Edict of Haijin that closed China off from the rest of the world. As a result, China, which at that time was beyond doubt the world’s most advanced country, gradually became what historians sometimes call an “arrested civilization.”

A few centuries later, by the 1800s, China’s long-running, self-satisfied policy of isolation had generated a backward, weak and stagnant nation. It soon became a tempting target for the militarily advanced, imperialistic, colonial western nations of that period.

The 1434 Edict of Haijin came right after a series of large Chinese naval expeditions under the command of the great Chinese admiral Zheng He. Six of these expeditions took place between 1405-1424, by order of Emperor Yonglo (also known as Zhu Di). In 1430, his successor, Emperor Xuando, ordered what was to be Zheng He’s last voyage which lasted to about 1433.

Admiral Zheng had commanded the largest fleets in the world at that time, each with one-hundred to three-hundred ships carrying sometimes over 25,000 men. Some of the ships were far larger than any other ships afloat. Such a maritime capability could have given China control of the world’s seas, and made the Chinese Empire a global power.

But the purpose of these voyages was not conquest but to display to the world the great might of China and to demand tribute from other countries. An inscription on a monument commemorating one of the voyages says that “from the edge of the sky to the ends of the earth there are none who have not become our subjects and slaves.”

Admiral Zheng took his ships south into the East Indies, then west along the southern coast of Asia and down the east coast of Africa. There is also strong evidence that another Chinese mariner, Admiral Zhou Man sailed along the west coast of America, perhaps reaching as far as Peru and Chile.

But although Emperor Xuando had authorized Admiral Zheng’s last voyage in 1430, the same Emperor in 1434 suddenly suspended all further official voyages. His Edict of Haijin banned all trade and interaction with the outside world. The Emperor ordered the destruction of all private ocean-going vessels and he let the giant ships of his navy rot at their moorings.

Chinese restrictions on foreign trade had actually begun a generation earlier with a series of piecemeal measures. One reason was widespread piracy of Chinese merchant vessels. Chinese authorities believed that suppression of trade for a limited period would result in an end of piracy as a lucrative business. Another reason was to put economic pressure on Japan which needed Chinese imports, but which China looked upon as a hostile nation.

Previous restrictions on private commerce with foreigners had, however, exempted such official voyages as those of Admirals Zheng and Zhou to collect tribute from foreign people whom the Chinese saw as inferior subjects. But by now many Chinese officials were objecting to the high cost of such expeditions. Also, there was a more fundamental motive against foreign contacts. Like many people in self-satisfied societies, the Chinese, unnerved by interaction with foreign cultures and races, were alarmed by the pernicious influence of barbarian ideas.

Later, China did permit limited exceptions to the ban on private trade and allowed Europeans to set up trading posts at Canton on the coast of China. But the Chinese authorities forbade foreign travel elsewhere in the country. Chinese policy continued to reinforce the economic and intellectual isolation that marked the character of China’s civilization over the succeeding centuries.

The long-term effects of China’s policy became evident in 1793 when Britain sent a mission to China to establish official diplomatic and trade relations. The head of the mission was Lord George Macartney. Macartney brought gifts for the Emperor, and presented a request from King George III that the Emperor facilitate greater foreign access to Chinese markets and allow a British ambassador to reside in China’s capital.

When Macartney arrived, Chinese authorities announced that he was bringing humble tribute from a foreign king. They demanded that Macartney perform the ritual kowtow before the Emperor (getting on his knees and lowering his head to the ground three times). Macartney agreed to do it providing a Chinese official of equivalent rank would perform a similar kowtow before a portrait of King George III.

The Chinese refused and they made it clear that their own Emperor was superior to any monarch on earth, and was unwilling to consider any other country as co-equal and sovereign. But eventually the Chinese allowed Macartney simply to genuflect on one knee in front of the Emperor, as he would normally do before his own king. One reason for the foregoing concession may have been the large and impressive size of Macartney’s entourage of 95 people and 85 cartloads of gifts and samples of British goods. Also, Macartney had come to China escorted by an imposing sixty-four-gun British warship.

Still, the Chinese were unresponsive to British proposals. The Emperor’s reply to King George III’s request for diplomatic relations and for expanded trade is revealing. The emperor alluded to King George’s “humble desire” to enjoy the benefits of Chinese civilization, praised the King’s “reverence” for the Emperor’s “celestial dynasty” and “devotion” in sending “tributes” to the Emperor. But the Emperor added that strange and costly objects did not interest him, and that he had commanded that these “tribute offerings” from King George be accepted “solely in consideration for the spirit” which prompted the King to send them.

Furthermore, the Emperor noted that he himself “swayed the wide world,” that his dynasty’s “majestic virtue has penetrated into every country,” and “kings of all nations have offered tribute by land and sea.” The emperor went on to say that China possessed all things and had no use for British products, so he saw no point in establishing a British representative at the Emperor’s court, or increasing the number of ports on the China coast open to foreign trade. The emperor then enjoined King George III to display “even greater devotion and loyalty in the future,” and “perpetual submission” to the Chinese throne.

Back in Britain, Macartney, who had enjoyed the rare opportunity to travel inland to the capital, wrote a detailed report on China. It described not only China’s great size and wealth, but also China’s backwardness and the delusional ignorance of its leaders. The report implied China’s probable helplessness in the face of any western coercion. Such new and detailed knowledge certainly piqued western interest in China as a large potential market for western manufactured products, and also generated an increased craving for Chinese goods.

Soon the west became more insistent that China open its economy to the world. By the 1830s, the British were smuggling opium to China through the British trading post in Canton in defiance of the Emperor’s prohibition of the opium trade because of its detrimental effect on the Chinese population.

Chinese authorities finally seized the British trading post in Canton and destroyed its opium stores. The Chinese action gave the British a pretext for an easy war. In 1842 the British forced China to open several other ports to foreign trade, and to cede Hong Kong to Britain.

The result further tempted the west. A few years later, the British once again went to war with China, this time joined by the French, and in 1858 they opened up yet more Chinese ports to western trade. Soon the Chinese Empire, which was obviously militarily and technically helpless, seemed (like Africa) ready for partition among several western colonial powers.

But in 1899 the U.S. Secretary of State, John Hay, asked the various European powers to respect China’s integrity, and to agree to an “open door” policy by which all western countries could trade equally with all parts of China. Each of the European powers, not wanting to appear grasping or belligerent, agreed but only on the condition that the other powers would also agree. Secretary Hay then informed each power that all the others had agreed. The United States thus saved China from conquest and partition.

The moral of the story is that any nation, even one as advanced and civilized as China in the 15th century, simply cannot retreat into its shell and insulate itself from the world without falling seriously behind.

Certainly, a very large nation can often advance somewhat due to impetus and stimulation from its own internal variety. But it also requires cross-fertilization from truly different cultures to challenge its self-satisfied and eventually stagnant self-perception, and impel it to realize its true potential.