Chelsea Selectboard Down to One after Angry Meeting, ResignationsFree Access

Four of Five Resign After Road Foreman Walk Out, Special Election in January 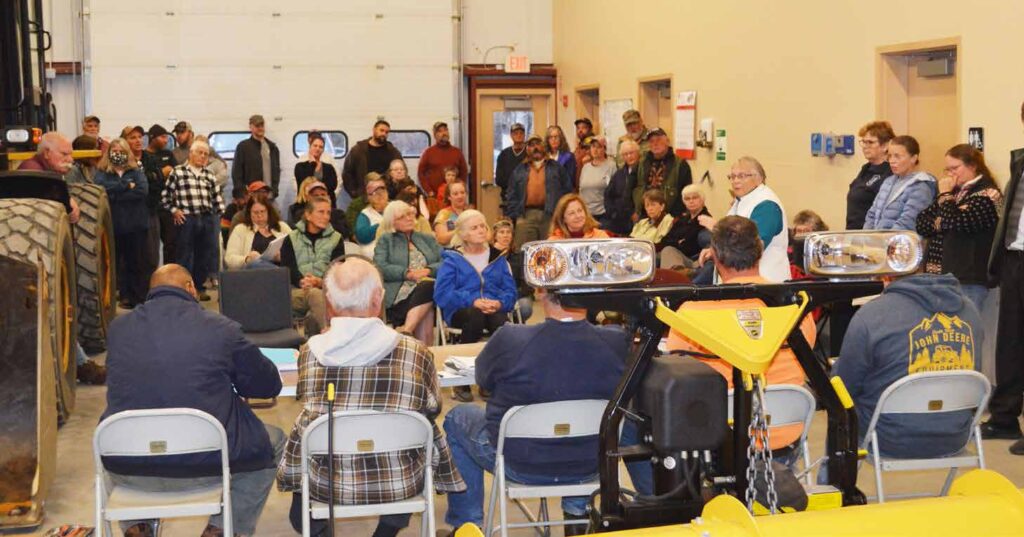 The lone remaining board member, Geoff Clayton, can sign checks to keep the bills paid, but there’s not much else he can do since it requires a quorum of three board members to hold an open meeting and accomplish much else according to Vermont statute.

Secretary of State Jim Condos and the Vermont League of Cities and Towns agreed- Clayton can also work with Chelsea Town Clerk Karen Lathrop and other town officials to set a special meeting at which an election can be held to fill the four board vacancies.

“If they have less than a quorum, they will need to call a special meeting to elect people to fill the vacancies,” Condos said. “The remaining selectboard member would have authority to draw orders for payments.”

The election, Clayton said via email, will be held January 3.

Statute requires the vacancies to be publicized, which Lathrop has done at multiple locations in town and on its website. Anybody interested in running for one of the four seats will need to file a Consent of Candidate form and petition with at least 10 signatures by November 28.

State law requires the election be scheduled at least 30 days, but not more than 40 days from the time they are advertised.

Details are available from the town clerk’s office.

Facebook, the Chelsea listserv, and Front Porch Forum have been overflowing with opinions, many of them wrong about the process.

That’s how people found out about a meeting held November 10 and where some of the misinformation began.

The ruckus started when the selectboard scheduled a Thursday night special meeting to hold an executive session for personnel. The plan, they said, was to talk to Rick Ackerman, the town’s longtime road crew boss who is highly respected and liked throughout the town.

The problem, the board said, is that Ackerman was repeatedly defying the wishes of the board, and cited unnecessary expenses, granting permission to work in the right of way verbally, which goes against town regulations, and other issues dating back months.

The problem they admitted later, is the document that threatened termination, although all five board members said it was a written warning and none of them expected it to come to that.

But when board chair Levar Cole handed the letter to Ackerman, several of the board members said he started reading it, then abruptly stopped, handed his keys over and told the board he quit.

“I asked him to read it,” Cole said of Ackerman’s response, adding he wasn’t sure the highway boss had understood it was just a discussion point to solve problems.

“He handed his keys over and said, ‘If that’s the way you feel, I’m done,’” Whitney said.

The meeting, which had been called for the personnel session, soon turned into a revolt.

As word spread through the community about the 3:30 p.m. meeting, cars started flowing into the parking lot until they filled every spot and lined the driveway of the town highway garage back out to the road and beyond.

At one point, more than 60 people were in the room, surrounded by a loader, a grader, a backhoe and plow trucks.

The meeting went on for five hours, as the board listened to person after person tell them they wanted Ackerman back.

Soon, the requests for them to ask him back turned into calls for the board’s resignation, primarily aimed at Mark Whitney, Bruce Hook, and Merrill Whitney, who is Mark’s father.

The tone in the room ranged from angry with shouting and insults to philosophical.

Many residents spoke repeatedly, but the message became many variations on one theme.

“You have one job to do for this town,” said Leyna Hoyt. “Step down. You are replaceable. Rick’s not.”

John Fraser repeatedly told the board members to resign.

“Do you five guys understand what the community wants?” Fraser asked. “We want Rick back. It’s pretty simple. We need the guy.”

Moments later he followed up.

“You didn’t hear a word we said,” Fraser continued. “The town has told you. Three of you have to go.”

Speaker after speaker called for the board to resign so Ackerman would come back.

The testy exchanges were too much for the elderly Merrill Whitney, who tried to leave, but Cole convinced him to stay.

Merrill’s son, Mark, understood what his dad was feeling.

Mark Whitney is a large man, with a thick beard and a booming voice. But he said he was intimidated and his feelings were hurt.

“My father said he was scared,” Mark Whitney said. “This is a town he had grown up in and thought he was respected.

“My emotions ranged from humiliation to infuriation,” he added. “I was born there. Most of those people I’ve known my entire life.”

Several board members say they were threatened with lawsuits.

While no actual suits were threatened in the meeting, there was a lot of talk of retaining legal services and considering legal actions.

Sheilagh Smith, an attorney who said she practices family law, continually made the case that the town had committed various legal faux pas against Ackerman and she was concerned the board had put the town in legal jeopardy that would cost taxpayers money.

Smith was sharing a copy of the board’s letter to Ackerman with attendees during the meeting. She said Ackerman had given it to her and told her she could share it.

In the end, the meeting was too much for the four board members who resigned.

None of the board members made any commitments at the meeting Thursday night. But toward the end of the five-hour long saga, as the questions continued, Mark Whitney said he would think about it.

“There are 900 registered voters in this town,” Whitney said. “I’m not going to be bullied by you or anybody else.”

Hook was the only board member who lost his patience, at one point, after having his integrity question. Hook, who was on the board previously and did not run for re-election was appointed to the board to fill a vacancy.

He said his wife, who died recently, had told him not to serve on the board because it was a thankless job.

“She was right,” Hook told the crowd, visibly shaken.

The next day, reality set in. Three members of the board resigned Friday and the fourth Saturday.

“I don’t feel right about walking away,” Mark Whitney said. “But I’d had about enough of 50 people screaming in my face. They wanted blood.”

Whitney said he and his father, Merrill, discussed it, but there was no collusion, as has been alleged by some who think the resignations were a way of disrupting the town’s ability to conduct business.

All four resignation letters were simple and straight to the point. Only Merrill Whitney gave any kind of reason.

“On the evening of Nov. 10th a group of town’s people belligerently demanded my resignation for doing my job. On Nov. 8th a town employee out right quit rather then discuss certain infractions. He was not fired he quit. If I am not allowed to do my job I have no recourse but to resign. I therefore resign. Effective as of November 11th 2022 at 12:00.”

Cole, who was calm and accommodating to speakers throughout the five hours, said he heard what they had said.

Had only two board members resigned, the three remaining members could have appointed two new members and continued to run the town. Without a quorum, all the town can do is wait for the election.

For now, it seems the people got what they wanted.

One announcement from the town said Ackerman is back.

“Rick Ackerman’s resignation was never officially accepted by the Selectboard,” the notice said. “Rick Ackerman will continue in his normal capacity and is our town highway department contact.”

Most of the people who were upset and several news organizations reported that the entire road crew had quit. But one board member said there were only two full-time members and one part-timer on the team. One of the fulltime employees had agreed to stay on. The part-time employee wasn’t coming back unless Ackerman returned. There has been no word what the road crew looks like at present.

The message came out just before Wednesday, when the first snowstorm of the year dumped several inches on the roads throughout Chelsea.

One Facebook message Wednesday thanked the road crew for doing such a great job on the roads.

Phone calls and emails to Ackerman seeking comment have not been returned.