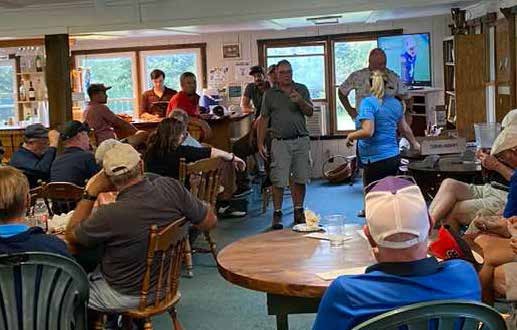 The weather cooperated and gave the 15 foursomes a picture-perfect fall day followed by a fabulous chicken dinner put on by Montague.

On the ninth-hole shootout, Jacob Barry was closest to the pin at eight feet.

For overall score, the Magee Office Products team of Paul Foley, Jim Sault, John Wirth, and Ben Lacaillade won first-place gross competition with a score of -16. The team birdied every hole on the front nine.

The first-place net score went to the Edward Jones team of Butch Greenwood, Mark Hutchinson, Dana Cole-Levesque, and Leo Connolly with a score of -12.

The Rotary Scholarship Golf Tournament’s success relies heavily on local business support through patronship, hole sponsors, and prize contributions. The event wouldn’t be possible without the support of these businesses and individuals.